It was late March and the snow was deep at the top of the best hike in southern Utah, The Subway in Zion National Park. I had been on this hike many times and knew that as we worked our way closer to the valley floor below, the snow would dissipate and then the real fun would begin! Despite the cold, this reconnoitering trip came off without a hitch and the following week we returned with a brand new Venturing Crew made up of BYU college students.

Nothing out of the ordinary happened during the first half of the hike. We descended to the canyon floor some 800 feet down a windy trail and made our way boulder hopping and crossing the river as we traveled several miles to the cascading waterfalls. Spring was in the air with a crisp breeze and we had remained dry and warm so far. As we entered the actual "Subway" part of the hike we saw rounded walls that were shimmering with the mist rising from the torrent of water flowing through it. The water was wall to wall, about 18 inches deep, and was approximately 35° F because of the snow melting two miles upstream. 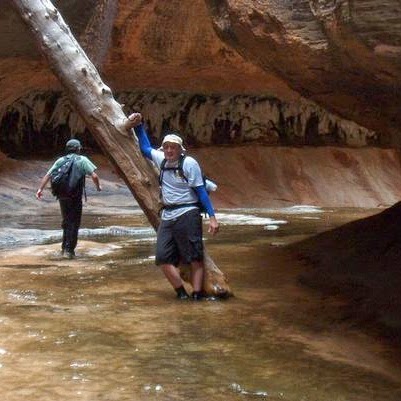 I posted myself at the base of a short scramble and spotted the students as they made their ascent and continued on up the canyon. After several students had made it to the top of this wall, I took a step back to call the next one up the river. Unexpectedly, my footing slipped and I vanished into a deep pot hole that was filled with freezing cold water over my head. I remember looking up at the next girl in line as she stared down at me through the water. She was helplessly trying to figure out how to get me out of the churning water while I frantically kicked against the current to get to the surface. After what felt like hours I was able to get to the top and take a breath, but then the real challenge began. The walls of the pot hole were covered with a thin layer of green algae that were so slippery that it was impossible to get a good grip. Thinking quick, the nearest student stripped off her backpack and threw me a strap. This extra help enabled me to pull myself up and roll out onto my side like a beached whale. I was soaked to the skin and my gear was completely wet with everything ruined, including my radio. We were miles away from any outside help.

Before shock and hypothermia set in, with the help of several students we worked our way downstream. We could see one ray of sunshine shining down into the canyon from the 2000 foot sandstone walls towering above. We had to get to it! As we came around the corner we saw Michael Chang, a good friend of mine and another of the leaders on this hike. He was a true Boy Scout and was prepared with every needful thing, plus some! After removing most of my wet clothes, he wrapped me in an emergency blanket and cracked a small heater inside. Several of the class members gathered around and prayed for me that I would make it out okay.

I truly felt the hand of the Lord warm my body and my heart that day!

The sun began to dip below the canyon walls and we were still hours away from the cars. Wet, cold, and with it getting dark, we had to move fast. It was slow going and we didn't make it back to the car until well after dark.

The moral of this story for me is: Be Prepared, or at least be with someone who is!

Thank you to Michael Chang and that Venturing Crew for saving my life by doing things for me that I could not do for myself.